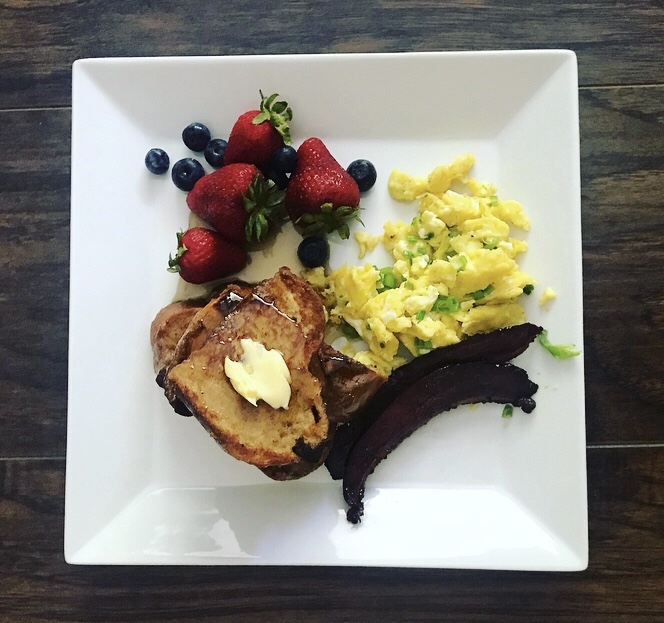 It’s date night for me and the hubs so I’m posting a dish I did a while back that I wanted to humble brag on lol!

This one I found out about through my father in law (hi Dad 👋) and he made it for me and my mother in law on Mother’s Day. My husband also got a chance to sample the flavors and he liked it so much that he had me make it for him on Father’s Day. I believe the recipe is by Tori Avey.

Let me start of by saying I’m by default a medium fan of French toast. It’s not the number one thing I go for on the menu, but if someone’s offering it I’m not going to say no. I would also like to say this was the FIRST time I’ve ever made French toast and all the odds were against me.

I LOVE THIS FRENCH TOAST. It was amazing when I had it the first time and I liked it so much even the second time. What makes it unique is the recipe calls for a ripe banana to merge the flavors together. I would have never thought to put a banana in there but it works!

The challah bread is light, airy, and soaks up syrup nicely (silly me, I thought French toast was made with regular loaf bread 🤭). I thought the banana would make it too sweet, but it adds a mild note of sweetness that’s not overwhelming for those of us that can’t take layers of sugar.

I added my own sides of scrambled eggs, mixed berries, and no that’s not regular bacon, that my friends is duck bacon! Get you some 😋

Anywhoo, my husband was very pleased with at my first attempt and has put this on his list of go to’s. So I suppose for the next few breakfasts I’ll be serving French toast challah style!

‘Til next time, happy eating 😁